With a background as diverse as this the artist’s work is undeniably influenced by her lived (often judged as invisible) experiences which gets a real voice and status leaning against her theoretical background from academia.

Her works are to be found in the midst of an area of tensions taking up Muslim migrant women in Western societies which is a central and an ongoing theme throughout her work. Trying to challenge the established Oriental prejudice on Islam, sexuality and gendered shame as well as migrant hybrid culture. Looking at the contemporary political scene from the Danish, Western, Turkish (general Middle Eastern perspectives) as well as from the migrant perspective. (Always searching to question and depict her cultural identity  through all these positions.

A more ephemeral, unruly and almost naive approach can be sensed in her work mixing up urban landscapes (and its signage)and socio political subjects of globalization. This is partly due to her conceptual and researching approach to art rather than a practicality founded in (skilled) handicraft.

She still expresses herself in a variety of materials and media such as texts, statements on drawings and as stencils, 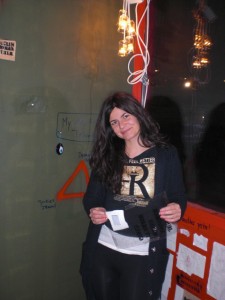